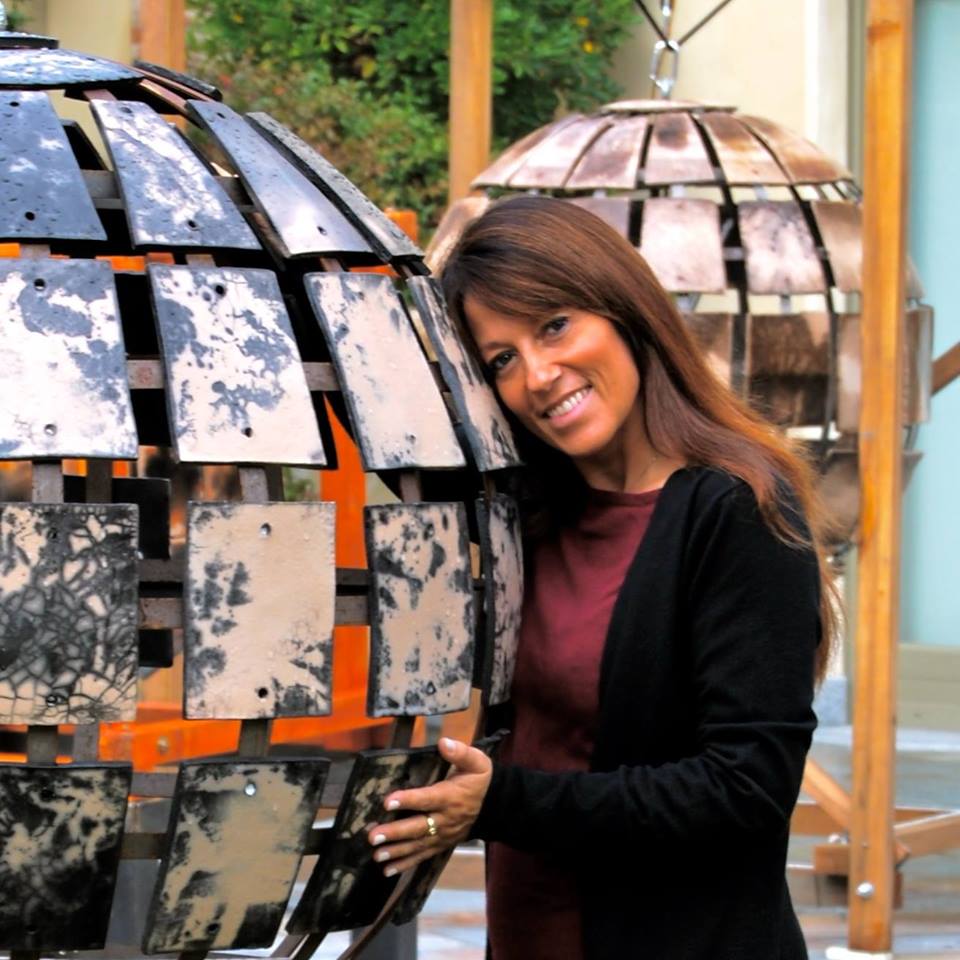 Born in 1971 in Buenos Aires, Argentina, she graduated from an arts high school in 1988. Since she was a child, she developed specific painting, sculpting and pottery techniques at the cultural centre in her hometown. She got a degree in design and advertisement graphics at the University of Architecture in Moròn, Buenos Aires.

She moved to Europe in 1990. Her cultural journey went on in Rome, where she joined the Argentinian Culture Association, and in Valencia, Spain, where she improved her decorative techniques on majolica, and she learnt further styles such as the Medieval “Socarrat”, “Siglo XVIII” and “cuerda seca”.

In Barcelona she got to know the aesthetic language of the mosaic and its peculiar and colourful shapes. Trencadis (porcelains, fountains, parapets and polychrome glasses), fake mosaic and Tiffany on majolica, elaborated as for both the decoration and the structure by Gaudi and Cornet (pieces of glass and pottery cut into irregular shapes, according to the technique itself, which is a new version of the Arabic pottery mosaic).

In 1997 she organized her first cultural events in Bologna, working with young artists of contemporary photography. In order to go on with her studies and experiments, she moved to Rome, where she better learnt about the procedures and techniques of pottery: the raku and its variations, soft raku, naked, hourse, saggar, obvara, copper matt, terra sigillata, chemistry of glaze (low and high temperature), chlorides and sulphates. She attended several workshops about plaster moulding, paperclay, pottery printing, slabs technique for geometrical shapes and she also took lathing lessons at the cultural centre L’Albero di Terracotta.

In 2008 she created and presented her first art exhibitions, the Fany series, a portrayal of refined effects and colours that, together with painting and pottery, identify a truly unique and personal idea of a scenic project.

At the moment she is working in her laboratory in Rome, testing her knowledge with great passion and alternating new materials, in order to obtain a continuous time-space change, communicating it through the innovation of contemporary art.

Fany expresses art with great freedom and the rhythm of creativity expands in a space-shape dimension, soaked with passion and enthusiasm. Her expressive skills were confirmed in the collective exhibition “Sette Artisti, Sette Stili” (seven artists, seven styles) that was held in the Italian Modern Art Gallery of via Margutta, where Fany presented a group of peculiar works where the scenic representation became a meeting point for painting and music. In her works, made of different materials joined in the context of a wooden frame or any other rigid support, the artist combines glazed pottery elements with metal fragments, giving shape and soul to dynamic compositions with their own independent value and without any structural bonds. According to the most attentive critics, these pictorial, sculptural and musical compositions are filled with the fusion (syncretism) of the three arts themselves, arousing strong and deep emotions in the audience.

This website uses cookies to improve your experience while you navigate through the website. Out of these, the cookies that are categorized as necessary are stored on your browser as they are essential for the working of basic functionalities of the website. We also use third-party cookies that help us analyze and understand how you use this website. These cookies will be stored in your browser only with your consent. You also have the option to opt-out of these cookies. But opting out of some of these cookies may affect your browsing experience.
Necessary Sempre abilitato
Necessary cookies are absolutely essential for the website to function properly. This category only includes cookies that ensures basic functionalities and security features of the website. These cookies do not store any personal information.
Non-necessary
Any cookies that may not be particularly necessary for the website to function and is used specifically to collect user personal data via analytics, ads, other embedded contents are termed as non-necessary cookies. It is mandatory to procure user consent prior to running these cookies on your website.
ACCETTA E SALVA